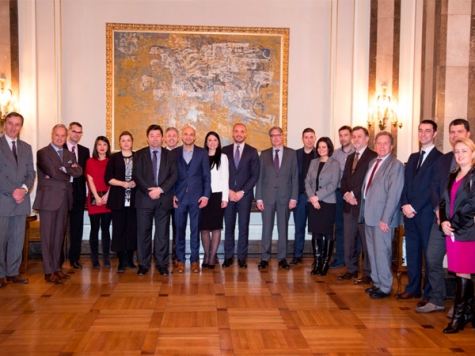 Assistant Mayor of Belgrade Borko Milosavljevic presented in the City Hall, project to improve energy efficiency in seven Belgrade Public companies "LEEN City of Belgrade", which will be implemented with the support of the Government of the Republic of Serbia and regional representatives of the Federal Republic of Germany (Baden Wuerttemberg).

Strategic partners on the project are the Regional Agency for Development and European Integration Belgrade, the Energy Innovation Center "Teslianum" and German company "LEEN GmbH", which provided 51 percent of the funds for the realization of the first phase of the project.

- This project is a good chance that through cooperation and taking best practices and exchange of experience enable further improvement of operations seven public companies in Belgrade, which have been chosen for this pilot project - said Milosavljević.

- We will not stop, and this energy efficiency project is just an example of how we can go further. The introduction of energy efficiency, which is a shortcoming identified in these seven companies did in order to further improve the business because swollen situation in Serbia and Belgrade shows that many industrial facilities are built according to the principles of energy inefficiency - Milosavljević pointed out.

He added that the goal of these companies is to have a minimum cost and maximum results, and savings in energy are on the line to reduce total costs. He also expressed hope that this project will further accelerate the economic cooperation between Serbia and Germany, as it is with us this year was declared the year of entrepreneurship of small and medium-sized enterprises.

Director of the Baden Wuerttemberg office in Brussels and a senior official of the Ministry of Foreign Affairs of the German region of the same name, Johannes Jung, said that the experience in cooperation with Serbia and workers who come here are more than positive.

He pointed out that the Government of Baden-Württemberg implemented a number of innovative projects that are associated with the German government at the federal level, as well as with the European Union through its offices in Brussels.

- This is a good project that provides for good technological solutions to increase the energy efficiency of more than 30 objects, which will enable the citizens of Belgrade, better service and better business results of selected companies. This project should be understood in terms of energy efficiency, in terms of good examples of cooperation of our countries but also in terms of Europe, it is important to stress that this project falls within projects are a good example and a guide not only the region, but also many countries that are EU member states do not have such a project - pointed Jung.

Director of the Regional Agency for Development and European Integration Belgrade Snežana Radinović also expressed satisfaction that such a project in the year of entrepreneurship in Serbia implements with a country that is known for its entrepreneurial spirit. It also expressed its gratitude to the Government of the Republic of Serbia, City of Belgrade and the Government of Baden-Württemberg for the great support this project.

She stressed that today's meeting officially marks the beginning of this project, which will include public companies, "Beogradska arena" SCR "Tašmajdan", "Sava Centar", "Belgrade Fair", "Pionirski grad", "Belgrade power plants" and SROC "Vračar". It is, she said, the companies that were chosen by the city as large consumers of electricity and other energy.

She noted that the project was included in the list of priority national projects of the Republic of Serbia, which means that the European Commission, the Government of Serbia and the Ministry of Energy recognized the importance of this project not only at the level of Belgrade, but in the whole country.

Energy efficiency measures will be, according to her, defined by September 2016, when it will move to the second phase of the project which will be financed through the IPA and the EBRD and other international sources of funding in the amount of 11 million euros. Also, a large value of this project is significant potential of application of the same methodology and the creation of new networks of energy efficiency, both in Belgrade and in other cities in Serbia, so this project is not the end of activities, but the announcement of new projects in the future that will arise from good cooperation between our two countries - said Radinović.

The main objectives of the project "LEEN City of Belgrade" are significant savings in energy consumption, reduction in operating costs of companies, compliance with European standards in the field of energy, raising the overall efficiency of the company, as well as the positive impact on the environment.